"running unites our two most primal impulses: fear and pleasure. We run when we're scared, we run when we're ecstatic, we run away from our problems and we run around for a good time.
When things look worst,we run the most. We have seen distance running skyrocket, and its always in the midst of a national crisis. Maybe it was a coincidence.Or maybe there's a trigger in the human psyche, a coded response that activates our first and greatest survival skill when we sense the raptors approaching."

From Born to Run by Christopher McDougall
Posted by Probe at 08:12 No comments: 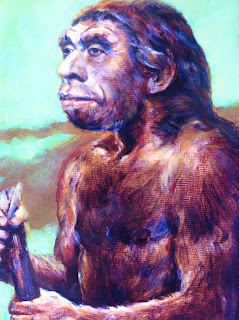 
What the fuck are you mumbling on about?
Be more assertive
less habitual
You always do what you want anyway

It was simpler on my own
I'm not sure I want to cohabit this planet with you
you primitive ape-like beast
but i like the way you smell and the warmth of your skin.

Can we eat now?
I am hungry
You are hungry
We are hungry...

I would like to welcome to the project my new producer (Producer- Artist development at South East Dance) Elizabeth Mischler.
We have been working together over the last few weeks on a GFA and booking of a tour for Running on Empty. Elizabeth is nothing short of outstanding, and I'm really excited about us producing this work together.


Everyone can run - it is a primitive instinct. Escape from danger. Hunt for food. Competition. Freedom. Gameplay. It reminds us to breathe. It makes us feel alive.

Running on Empty tells the story of two people colliding over time, where a relationship filled with curiosity, intimacy and tension can suddenly explode into movement – until something has to be said.  Dance, text and song combine to take us through an ever changing, ever growing web: between peace and struggle, between reality and fantasy, between escape and confrontation.
Perpetual, repeating, like a cycle, like running...

“I’m attracted to writing that is timeless, that speaks of simple human interaction, chance encounters and of deep-rooted connections, connections between physical and emotional mindsets, underpinned by these central questions:  ‘what gives a person the ability to run for a long distance?  And what is the connection between the physical act of running and the mind power involved in any action that repeats a pattern over and over again over time?’   Stamina and longevity are about more than just fitness, and can also be applied to human relationships and, finding further analogies for that, running away from something, going full pelt, a step too far, running on empty.” (Antonia Grove)