My blog entry for The Stage:
I've been Artistic Director of the company Probe since 2004. It started as myself and dancer Theo Clinkard running the company together, driven by the desire to control our own career trajectories and invite only collaborators we were passionate about.
We began merging artforms and introducing collaborators outside of contemporary dance very early on; film makers, composers, using text and song, creating sets that moved and transformed the space etc. Always looking for interesting ways to challenge ourselves and the stereotypes of contemporary dance presentation.
When I became sole Artistic Director in 2008, I changed the nature of the work Probe was producing to explore a singular narrative, concept or subject matter for the duration of a piece.
I also wanted to continue collaborating with Artists from different genres. Our present  production, 'Running on Empty', involves Theatre Director Jo McInnes, writer Brad Birch, choreographer Charlie Morrissey and songwriter Lee Ross.
The process for devising cross-genre work is full of challenges since there is no tried and tested methodology to follow. Despite an extensive research period, when we came into the studio to create Running on Empty, we had nothing. No script to hold onto, no songs had been written since they needed a story to follow and we had to develop a new choreographic language and live sound score for each scene as it emerged. Scenes would appear, come to life and then disappear as the piece evolved. You learn not to get attached to material you are creating as, whilst it is relevant to the process, more often than not it will become irrelevant to the story as it unfolds.
The collaborative team for Running on Empty brought a vast wealth of knowledge and experience to the room; this was both thrilling and completely overwhelming! The possibilities become almost too great. We, the 3 performers, contributed to the piece by making choreography, producing bits of writing for the script, composing music and offering suggestions for tackling scenes. As well as the director there was a choreographer, writer and  songwriter contributing material. I wouldn't go so far as to say 'too many cooks...', however it did make for an extremely rich, hearty and at times overflowing stew!
The Director, Jo, was left with many difficult decisions and questions to answer. What exactly is this piece we're making? What's the story and how is it best told? What material to keep? What to throw away? What else needs to be made and how? We are still asking those questions now, even after some shows in Autumn, but with our Soho Theatre run opening on 4th february, and after time off to reflect ,it feels like we might actually be on the way to finding the answers.
This has probably been my most ambitious and challenging project to date. When the collaborators are this good the stakes are high, the expectations are high. I realise now that you need more creation time for a process like this to prevent the work being thrown on stage before full investigation, formation and scrutinisation has occured. The problem with touring dance is that, unlike theatre, there is no opportunity to preview a new work in order to try out a show in front of an audience. Show one is the premiere and it is expected to be finished, which I think hinders risk taking in dance. It has become increasingly clear to me that due to the complex nature of devising a work using so many different genres, the crucial part of the process is rubbing it up against an audience, listening to the response and refining it accordingly.
Whilst any piece of art never feels truly 'finished', it eventually reaches a resting place and that's when the performers can ride the wave and get stuck in. It seems you can't rush or control when this happens, which can be frustrating, but when it comes it's worth the wait and feels totally liberating! I can feel it coming and I can't wait, roll on Soho Theatre.
Www.probeproject.com 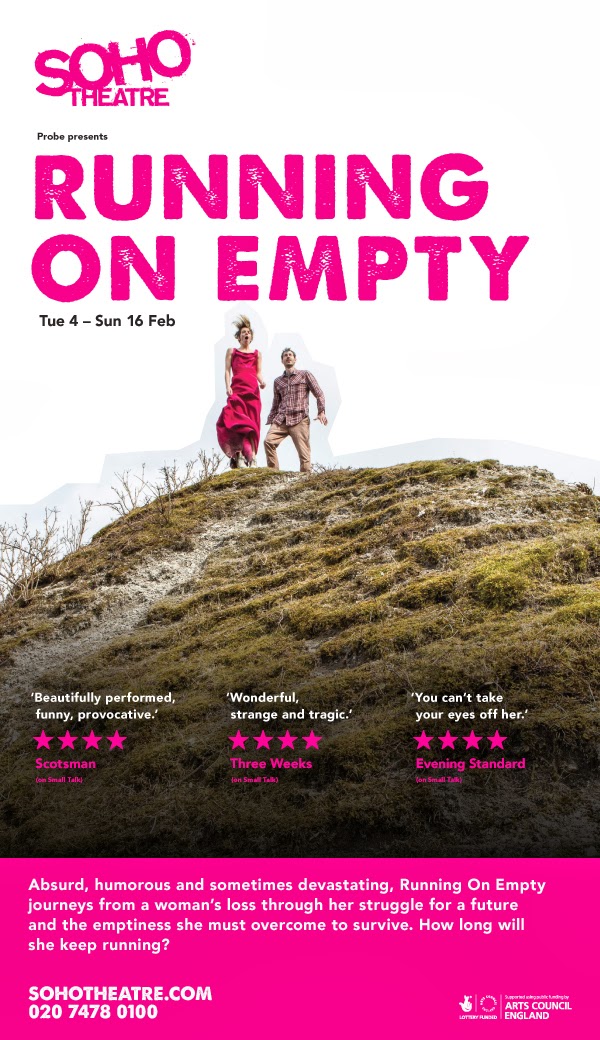 Check out our tour dates for spring 2014 here:
www.probeproject.com

Hope to see you there!

Antonia and the team
Posted by Probe at 03:51 No comments: