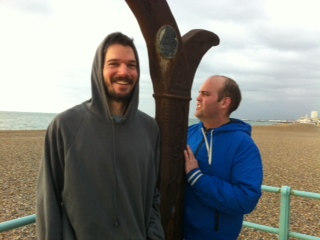 
Surely everyone can run?
It is a primitive instinct. Escape from danger. Hunt for food. Get home before sun down. Pleasure. Excitement. Gameplay. Foreplay probably.


But running is typically a solitary act. It strikes me you have to be happy in your own company, in your own head, in order to run long distance. Or rather, happy to get out of your head and into a kind of void.


‘what exactly do I think about when I’m running? I don’t have a clue.


There’s something about different extremes that interests me.

These differences exist in life and relationships too.


‘In some areas of my life I actively seek out solitude. Sometimes, however, this sense of isolation, like acid spilling out of a bottle, can unconsciously eat away at a person’s heart and dissolve it. You could see it, too, as a kind of double-edged sword. It protects me, but at the same time steadily cuts away at me from the inside. I think in my own way I’m aware of this danger- probably through experience- and that’s why I’ve had to constantly keep my body in motion, in some cases pushing myself to the limit, in order to heal the loneliness I feel inside and to put it in perspective.’


I love to see runners in the ‘zone’. They seem in a strange place somewhere between peace and struggle. It seems so poignant a place for me. What are they thinking? What part of the brain have they accessed in order to do this? Does it feel natural to them, or are they working against instinct?


What has to give in this person’s life and mind in order to reach this place?


‘I don’t think most people would like my personality. There might be a few who are impressed by it, but only rarely would anyone like it. Who in the world could possibly have warm feelings for a person who doesn’t compromise, who instead, whenever a problem crops up, locks himself away alone in a closet?’

I’m interested in the mind body connection which I find extreme in running.


I’d also like to know whether a person’s character and tendencies defines their suitability to perform physically more akin to a hare or a tortoise? And/or whether a person’s physical body make-up forms a person’s behaviour and tendencies? What is that relationship, that two way connection? Does science think it has some answers? A person’s mind and its thoughts are wonderfully undefinable and mysterious.


So it lives in the world of story-telling, invention and speculation.


(about having the muscle type most suited to long distances and not sprinting)
‘I don’t know any technical details about the characteristics of this type of muscle, but I imagine it’s mostly innate. And I feel that this type of muscle is connected to the way my mind works. What I mean is, a person’s mind is controlled by his body, right? Or is it the opposite- the way your mind works influences the structure of the body? Or do the body and mind closely influence each other and act on each other? What I do know is that people have certain inborn tendencies, and whether a person likes them or not, they’re inescapable. Tendencies can be adjusted, to a degree, but their essence can never be changed.’

(about some bright young girls running)
‘...they run like the wind. You can definitely feel a sort of aggressive challenge emanating from them. They seem to be used to passing people, and not used to being passed. They all look so bright, so healthy, attractive, and serious, brimming with self- confidence. With their long strides, and strong, sharp kicks, it’s easy to see that they’re typical mid-distance runners, unsuited to long-distance running. They’re more mentally cut out for brief runs at high speed.


Compared to them I’m pretty used to losing. There are plenty of things in this world that are way beyond me, plenty of opponents I can never beat. Not to brag, but these girls probably don’t know as much as I do about pain.’


Wow, he’s beginning to sound a little self-indulgent. And my reaction is an immediate dislike of running, runners and all acts of solitude!
Cup of tea anyone?